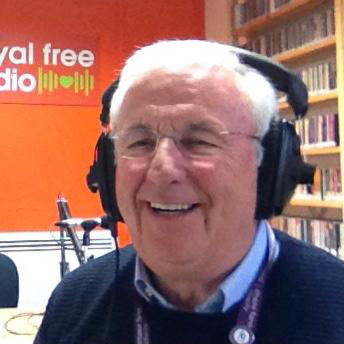 John Smeeton
About John
John has been a member of Royal Free Radio since 2016
John's Shows
» John's Afternoon Delight
Personal Comments
I started with Hospital Radio Chelmsford working in a converted caravan located in grounds of the hospital, when a large lorry passed by the caravan shook and the records would jump. This was over 40 years ago, I worked for a short time for Radio Hallam in Sheffield, presenting weekend breakfast shows starting at 5am so very short on sleep, this took place in the mid seventies. During the late sixties and through the seventies, I did lots of DJ gigs, including boats on the Thames, more jumping pickups, and was lucky enough to play in some of the top London venues, working with several of the Radio One DJs. My children are heavily in to music and had access to my vinyl collection. Papa was a rolling stone by The Temptations was a family favourite when we got together I would play the track which has a long intro and the test was to raise your hand when the vocal started my daughter was often spot on. I am very excited to join Radio Enfield and looking forward to presenting a two hour program on Tuesday afternoons.
What's Playing
Last 20
Current Show
Today's Schedule